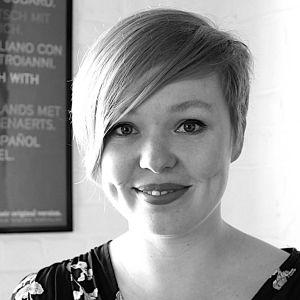 After obtaining a translation-related degree in Germany (languages: English, French & Spanish), Theresia Feldmann studied German, French and English literature at the universities of Brussels (VUB) and Nantes. After having worked in the European district in Brussels for a several years (i.a. for the Goethe-Institut), she started working on her PhD under the supervision of Elke Brems in 2016. She is part of the international research group around the project “Eastbound: the distribution and reception of translations and adaptations of Dutch-language literature, 1850-1990”. This joint project of KU Leuven and the Huygens ING in Amsterdam forms part of the overarching initiative Circulation of Dutch Literature (CODL). The focus of her research is on the international cultural and economic networks which brought literature from the Low Countries to the German-language area, and the reception of that literature in the German-speaking world. She addresses this topic in her recent publication “‘Aus äußeren Gründen nicht verfügbar’? German Anthologies of Flemish Literature during the Second World War,” which appeared the Journal for Dutch Literature in 2018. She is part of the Research Unit “Translation and Intercultural Transfer” and a member of the steering committee of the “Centre for Reception Studies” (CERES).