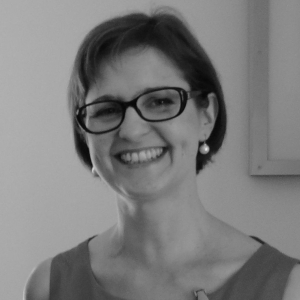 (° 1962) is professor of French and historical linguistics at the University of  Leuven.  After her studies of Romance languages (French – Spanish) at the University of Leuven, she started there as a teaching assistant in 1984, and she completed her PhD on the development of the noun phrase and determiners from Latin to Modern French in 1991 (Émergence et évolution du syntagme nominal et de la détermination du nom en français). She attained academic tenure in 1991, and is full professor since 2009.

She was vice-dean of Education of the Faculty of Arts from 2006-2010, and invited professor at Paris IV-Sorbonne in the spring of 2011, and at the École nationale des Chartes in the spring of 2019. Next to her research, she has always committed herself to tasks in several committees. Her teaching lies in French historical linguistics, French phonetics and French proficiency in the bachelor and master programs in Language and Literature. She also teaches a course on French historical texts for History students.

The research interests of Michèle Goyens lie in the field of French diachronic linguistics. Not only does she work in the field of text editing (a.o. Evrart de Conty’s Livre des Problemes de Aristote), but she has always been interested in the role medieval translations into French can play in the study of linguistic change, e.g. with respect to syntactical problems (determiners, case system, prepositional phrases), but especially to lexicology. During the last decennium, she has focused on the development of the medical vocabulary in French during the Middle Ages and the Renaissance, and the role played by Latin on the survival of medieval neologisms in the field of medicine. Several research projects she has lead have shed a new light on that matter. She is currently also coordinating the team responsible for medical terminology in the Dictionnaire du français scientifique médiéval (DFSM).